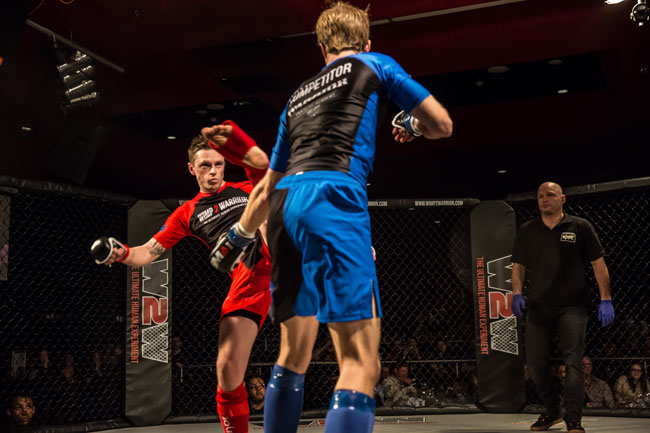 Some lawyers go for runs or join lunchtime sports teams to get fit. James Hall, 30, embarked on a gruelling six-month training program earlier this year with the goal of fighting in an amateur mixed martial arts (MMA) fight in July. Hall, who earned the nickname “the hitman” from coaches in the program, lasted almost two full rounds and was declared the loser with just one second to spare in the second round. He speaks to KATE ALLMAN about his experience.

I’m not a gym person – I don’t enjoy going to the gym and lifting weights.

I played rugby when I was at school and did karate when I was really young. But I sort of gave up organised sport when I left school.

When I was working as a law clerk, I started feeling unfit because I wasn’t doing much exercise. We’d go out for lunches all the time and it was all hot chips, parmigianas, beers, all that stuff. I thought, “I really need to do some exercise.”

I started kickboxing at a gym in Balgowlah one day a week. After a while, I upped the training to a few days a week. Eventually I thought, “I want to put this training to use somewhere. I want to fight someone!”

A mate I used to work with had done this program called Wimp 2 Warrior. It’s a six-month training program run by gyms around the world that introduces regular people to MMA fighting. At the end of the program, you have a real fight with an opponent also in the program. Conor McGregor’s coach is the European head of Wimp 2 Warrior.

I saw this friend and watched his fight on Facebook and thought, “If he can do it I can. I could beat him up!”

For the first eight weeks, we trained four mornings a week from 5.30 to 7. After eight weeks, training became five days a week.

Near the end we did this thing called “Fight Camp” which was an intensive week in which we started sparring and learned to hit people and be hit. It was tough. You have to learn to keep your eyes open, get your hands up, take the punch as best you can and keep pushing forwards.

I was a pretty unhealthy eater before doing the program. I’d skip breakfast all the time and I’d sometimes skip lunch. I’d have lots of coffees during the day and lots of sugar. They gave us a training diet to follow and after a while I’d never felt so healthy in my life! I ate lots of oats, bananas, poached chicken and soba noodles. I’m quite a skinny guy and I never really liked doing weights, but suddenly I had muscles and felt strong and confident.

When I came into work after training, I’d be really energised and happy. I have noticed I’m more confident at work and I don’t get stressed as easily. Even court appearances don’t seem such a big deal. It’s not as scary as standing in a cage looking at someone who wants to hit you.