The NSW Minister for Education issued yet another version of the Not-For-Profit Guidelines for Non-Government Schools in June 2019, only six months after the previous version. While many had hoped for substantial change and improvement, this was not to be. On the positive side, there is now a section in the Guidelines dealing with the use of a school’s assets by other schools or community groups. This overcomes the concern that some schools were having about the obligation they felt they had following the Building the Education Revolution to allow use of buildings funded by the BER program for some community use. 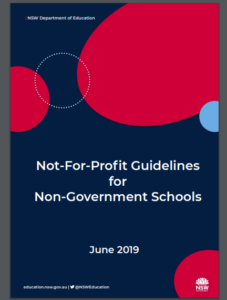 Unfortunately, the vexed issue of whether redress payments by a school which has decided to participate in the National Redress Scheme could cause the school to operate for profit has not been dealt with specifically. The Guidelines suggest that such payments would not comply with the section 83C requirements. The section headed Ex-Gratia Payments on page 20 states that a payment made in circumstances where there is no admitted legal liability to pay will generally not comply with those requirements. As it is voluntary for a school to participate in the National Redress Scheme, it is arguable that, where a school decides to participate and is then required to make a redress payment, there is no legal liability to make the payment.

The contrary view is that choosing to participate in the National Redress Scheme is a reasonable thing to do and one encouraged by our Commonwealth and State Governments. Accordingly, once the school is a participating institution, the obligation to pay redress is a statutory one and so the payment is no longer an ex-gratia payment. Indeed, the payment more aptly fits under the section headed Compensation, Settlements and Other One-Off Payments, also on page 20. There, it is said that a payment by a school to an individual in order to settle claims made against the school based on alleged breaches of the school’s obligations under contract, statute or common law do not breach section 83C provided that the payment is reasonable and not excessive in the circumstances. Given that the amount of a redress payment is determined by the Scheme Operator, the Minister could find it hard to say that the payment was not reasonable.

It is disappointing that the Minister has chosen not to make it clear that making redress payments do not breach section 83C. However, I do think that it would be a brave Minister who would seek to cut off a school’s government financial assistance for making redress payments, particularly when the plight of survivors arouses considerable public compassion.

It is easy for NSW schools to focus on the provisions of section 83C and for schools in other states to focus on their comparable state legislation. However, it is important that all schools in Australia not overlook the comparable provisions of the Australian Education Act 2013 (Cth). While nothing specific is said in that Act about redress payments, it does say that government financial assistance must not be spent on the preparation of or in the course of any litigation – Regulation 29(2). It is not clear whether this prohibition extends to settlement payments or to making payments ordered by a court. It is also not clear whether financial assistance may be used to meet the costs associated with belonging to the National Redress Scheme or to make redress payments under it. One also needs to remember that the federal Minister can withhold Commonwealth financial assistance if, under state legislation, a school is considered to be operating for profit. Accordingly, if a NSW school is in breach of section 83C because it uses any of its assets or income for a purpose other than the operation of the school, it risks losing its NSW Government funding and its Commonwealth financial assistance even though it has not used that Commonwealth financial assistance for the non-school purpose.

I spoke in more detail about this subject and the relevance of good governance to it at a national school law conference last month. My paper, Financial Good Governance, Related Parties and Protecting Funding Arrangements, is important reading for every school governor, leader and administrator.