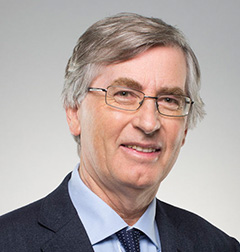 With more than 38 years experience in the areas of litigation and dispute resolution, Robert is one of Carroll & O’Dea’s most sought after partners.

Robert’s practice is extremely busy but he has time to ensure that every client has the benefit of his personal input.

He has had extensive experience advising both plaintiffs and defendants, which enables him to bring a balanced and practical approach when advising his clients.

For the past 20 years Robert has acted for the Transport Accident Commission of Victoria in respect of matters that come within the jurisdiction of . With a considerable interstate dimension to his practice, Robert has developed extensive expertise in cases in which conflict of laws issues arise. He has been involved in a number of cases, which have become significant precedents in the area of conflict of laws.

“When people face litigation, they are often going through some of the toughest issues in life. At Carroll & O’Dea, we provide our clients with practical, hands-on strategies, the best technical advice, all communicated in straight forward language.”