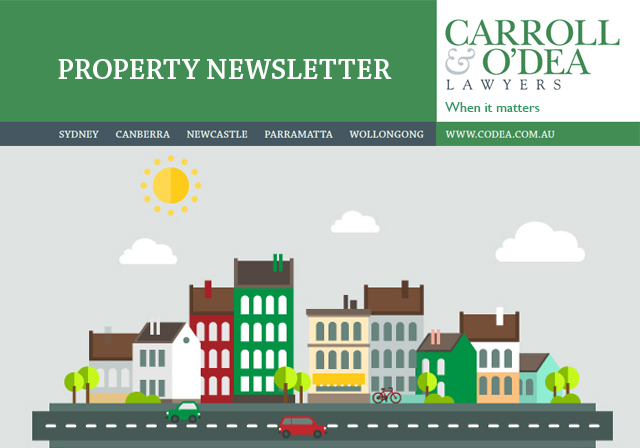 Off the Plan Purchases

Almost every Off the Plan contract provides the Vendor with flexibility to vary the plans for the units, including the areas of units.  Almost invariably, the contract then gives the Purchaser the right to rescind if such variation is more than, say, 5% of the agreed area.

Here is what can happen:

A good example of how Purchasers are at the mercy of the Developers’ focused financial gain.

Insist on a special condition which provides that if the area decreases by more than 5% the purchaser can elect to either rescind or demand a pro-rata reduction in the purchase price.
Or, simply ensure you buy from a long standing reputable developer.

We have all seen the movie “The Castle”, poking hilarious fun at the Government’s powers of compulsory acquisition over your home.

But what if your own neighbour could also compulsory acquire your home?

So long as 75% of owners in the strata plan agree, (some of whom may be investors or developers), the entire site can be collectively sold or re-developed.

Sydney needs more housing and the Governments justification for this proposal is urban renewal and consolidation.

If an apartment building is nearing the end of its life then it might make “some sense” to force one or more reluctant owners to give in and sell their unit so as to enable re-development of the entire building.  However, this is not a criteria in the draft legislation.  There is no requirement that the building be run down.  Indeed the building may be in first class condition however, because it is located in a great area, with potential for higher density redevelopment, then under the proposal a majority of 75% of owners could force the reluctant owners to sell. There is no proposed criteria which looks after the elderly or infirm owners who simply have no desire to sell their property, nor move to another home.

Nor is there any criteria that the proposed sale must yield a higher density development.  In other words, an existing 8 apartment building could be sold by 6 out of 8 owners (forcing 2 reluctant owners to sell) with a resulting new development downsized to 4 apartments as an end product, thus defeating the supposed aim of increasing Sydney’s housing availability.

Whilst the Government currently can only compulsory acquire properties for public purposes (eg. infrastructure, roads, train lines, etc) it is now being proposed that private citizens can compulsory acquire their neighbours for the single purpose of deriving profit, making no contribution to the public purse or needs of the community.

If you thought the script for The Castle was entertaining, wait for the next movie based on this proposed legislation.

Exchange of emails can lead to a binding Agreement for Lease

In the recent case of Vantage Systems Pty Ltd v Priolo Corporation Pty Ltd [2015] WASC 21, the Court of Appeal of Western Australia held that an email exchange between a tenant and a landlord’s agent amounted to an immediately binding agreement for lease and a licence, despite the fact that:

The facts
The tenant’s lease of office premises and licence of six car bays was due to expire on 30 June 2009.

In May 2009, the landlord and tenant entered into negotiations in relation to a new lease of the premises and licence of the car bays.

On 4 June 2009, a revised proposal was sent from the landlord’s agent to the tenant detailing a number of the terms of the lease, including the duration, rental, rent reviews, outgoings, make-good provisions, bank guarantee, GST and the terms of the car bay licence. The email asked the tenant to “confirm in writing…that these terms are acceptable”. The revised proposal stated that “the Lessor’s standard Lease and Licence shall be utilised to document and [sic] agreement between the parties, and shall be prepared by the Lessor’s solicitors incorporating the relevant terms contained within this proposal”.

“We have received our sub-tenants [sic] approval of the terms as well. Please proceed with wrapping this up.”

A draft lease agreement and licence agreement were subsequently prepared by the landlord’s solicitors and sent to the tenant on 2 July 2009. The tenant delayed in reviewing, signing or returning those documents.