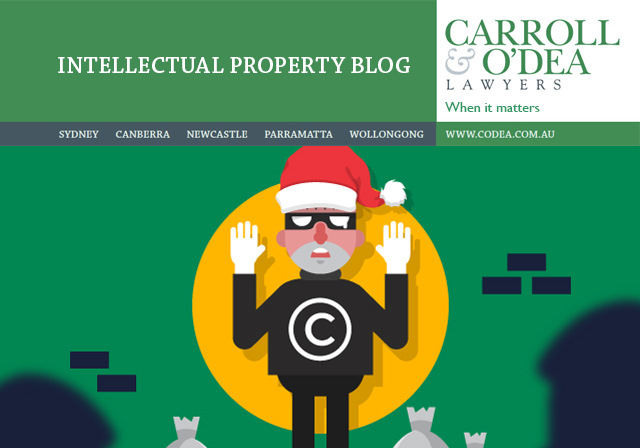 Santa Claus is Comin’ to Town

Published on December 12, 2015 by Patricia Monemvasitis and Kim Leontiev

Santa Claus is Comin’ to Town – and away from the studio! An IP Tale of how a family won back a Christmas classic

2015 has been another big year in the world of IP. We had the Federal Court order discovery on Internet Service Providers in relation to account holders who may have illegally downloaded a copy of the film Dallas Buyers Club, the Federal Parliament passed the website blocking laws (Copyright Amendment (Online Infringement) Bill 2015), not to mention the commencement of metadata retention in Australia and the High Court victory for Yvonne D’Arcy against Myriad Genetics Inc in the battle to invalidate the patent over the BRCA-1 gene.

As we prepare to sign off for 2015, and with the festive season now upon us, we could not help but seek a way to work Santa into this final post of the year. Fortunately, the US Second Circuit Court of Appeal made it all too easy with their timely decision to remind us just how relevant and lucrative Santa can be. Here is a little tale of Baldwin v EMI Feist Catalog Inc a legal contest over the copyright to one of the most frequently performed Christmas songs of all time![1]

In a unanimous decision, the three judges of the Court of Appeal held that “Santa Claus is Comin’ to Town’ – well, the copyright royalties anyway to this Christmas classic will, around this time next year, be reverting back to the family of the original song writer John Frederick Coots. Coots co-wrote the song with Haven Gillespie in 1934 after which the pair entered into a publishing deal with a company eventually to be acquired by EMI, Leo Feist (‘EMI’).

Copyright in the song was governed by the US Copyright Act of 1909 which granted 28 year initial terms for copyright with the possibility of renewal for a further 28 years (a total 56 year term). This two term system was designed to allow authors of copyright works, who would usually be in an inferior bargaining position to renegotiate the terms of their grant once the value of the work could be tested. Accordingly, in 1951 (17 years into the initial term) Coots assigned the copyright in the musical composition of the song to EMI in exchange for royalties pursuant to an agreement (“the 1951 Agreement”). EMI then renewed the copyright for a further 28 years in 1961.

Copyright should have expired in 1990 making the song public domain and this whole article completely irrelevant, but like Christmas, Congress can surprise. A new Copyright Act was passed by Congress in 1976. Under the 1976 Copyright Act, the duration of copyright was extended to 75 years, extending the copyright of the song to 2009. The 1976 Act also contained a special termination provision being Section 203 which allowed authors (or their statutory heirs) to terminate any grants of copyright in the work after 35 years from the date of grant regardless of the term or anything else recorded in the agreement by which the grant of copyright was made. This measure was designed to allow the authors or their heirs to benefit from the extension of the duration of copyright that may not have been contemplated in the original grant before the 1976 Act was passed.

In response to the extended copyright term, Coots and the successor of EMI entered in into a further agreement assigning EMI’s successor the remaining term of the copyright in the musical composition (‘1981 Agreement’). The 1981 Agreement paid no regard to Section 203 because copyright was expected to expire before the 35 year period following which Section 203 allowed the author or the heirs to terminate an agreement granting copyright.

But confirming that there really is a little bit of magic to Christmas, Congress passed the 1998 Sonny Bono Copyright Term Extension Act which extended the term of copyright from 75 to 95 years from the registration of the song extending it to 2029. The 1998 Act again contained a provision allowing early termination of an agreement upon 5 years after the expiry of a 75 year term.

And just like that, the legal flurry started with lawyers for Coots heirs serving termination notices on EMI in 2007 and 2012 to terminate the 1981 Agreement in 2016. In response, EMI offered the Coots family $2.75 million for the copyright, which was rejected as insufficient. EMI then argued that it owned the copyright until 2029 based on the 1951 Agreement given that the 1981 Agreement was only relevant in the grant of future interests that vested in the Coots family and not the original copyright assignment of 1951.

And so the tale concludes with the family winning back it’s rights to an unstoppable jingle – but as things are in law, not without a few shades of complication. As the decision only relates to the original copyright, EMI still gets to keep the foreign rights to the song as the revenue streams under copyright licences issued between 1981 to now for various covers including the famous Bruce Springsteen cover. So EMI can still look forward to every i-Tunes download of the Boss’s classic rendition.

So you better not cry, and you better not pout because the Court of Appeal has ruled and yes, Santa Claus is Comin’ to Town, and next year he will even visit the Coots with some royalties in the sack. For the rest of us, we’ll just have to try to be good!