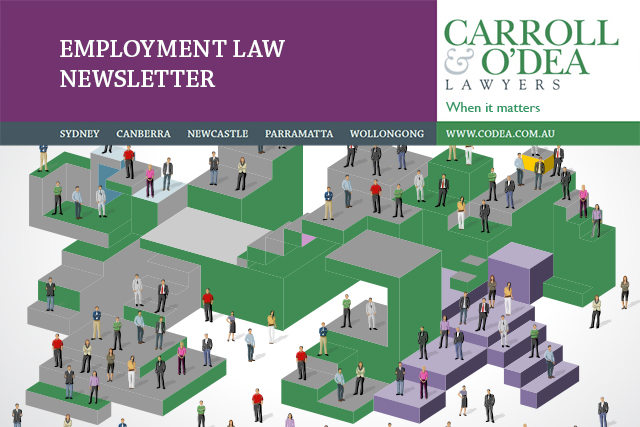 Welcome to the Quarterly newsletter for Carroll & O’Dea’s Workplace Solutions group.
In this edition of our Newsletter, we report on:

We hope you enjoy this edition of our Newsletter.

The Right to Silence – Fact or Fiction in the Workplace?

Is there a right to silence in the workplace?

The world, including the workplace, operates best when we all cooperate in a proper exchange of information for lawful purposes.

The criminal law principle that an individual cannot be compelled to testify at their own trial or to confess their guilt (i.e. their right to silence) privileges them from having to say anything during an investigation or a trial.  Silence cannot be held against an individual to establish guilt.

So, do employees have the same right to refuse to answer questions in a workplace investigation?  Perhaps the subject matter of the investigation will be important?

On 30 August 2013 Justice Adamson in Baff v NSW Commissioner of Police upheld the privilege against self incrimination for Constable Baff allowing him to refuse to answer questions by the Police Commissioner arising from a shooting incident in May 2011.

Although Constable Baff is a police officer and, the incident was a shooting, the principle that an employee who is suspected of a crime in the workplace could maintain his/her right to silence in any workplace investigation arising from that incident or allegation remains the same.

Of course, any workplace investigation must be fair and thorough and be conducted objectively by a person with the proper skills to undertake the investigation.

While there was considerable ‘colour and movement’ around the Fair Work Commission’s (FWC) anti-bullying powers – after the first 12 months of operation the laws have substantially been a non event. Out of over 500 applications that have been filed, just two anti-bullying orders have been made by the FWC. Whilst these are modest indeed, there is real scope for many more orders to be made given nearly 1 in 10 Australian workers say they experience bullying at work.

That is why the seeming ‘slow-burn’ early impact of the FWC’s bullying powers should not lull businesses into thinking that bullying is not a significant workplace issue for them now and into the future.

Bullying comes with significant cost, both financial and personal, so it is right that this area of workplace misbehaviour is being targeted so directly.

The FWC’s anti-bullying powers are essentially based on existing legal principles found in occupational health and safety legislation and common law.

Termination – A Shortcut to Redundancy?

1. A genuine redundancy is when the employer no longer requires the role to be performed by the employee or by anyone else due to operational requirements of an organisation as a National System Employer (which are most employers excluding the public sector).

2. The National Employment Standards (NES) under the Fair Work Act 2009 (Cth) set out minimum redundancy entitlements and the processes for National System Employees.

3. Employers must meet any obligations regarding consultation and decision making and job search entitlements in an Award, Enterprise Agreement and/or Contract of Employment.

4. If a redundancy is not a genuine redundancy, the employer risks a claim for:
– unfair dismissal;
– breach of contract;
– breach of industrial instrument (Award or Enterprise Agreement);
– or other claims under the Act.

5. Redundancy attracts redundancy pay which is also known as severance pay.  Severance pay to be paid in addition to any payment made in lieu of notice.

Updating the National Employment Standards – have the politicians done a “set and forget”?

Since the enactment of the Work Choices legislation in 2006 Australia has been getting used to a concept, unknown in the country since Federation, of a national set of legislated (not judicially decided) minimum standards for all employees.

When the concept was first introduced, some of us were concerned about two possible problems: firstly, that having certain conditions fixed by legislation could result in them atrophying, despite changes in society or economic circumstances requiring their modification or updating, due to a lack of political will or consensus; and secondly these conditions might be subject to change due to some temporarily prevailing political obsession, or in response to a particular extreme set of facts.

After the best part of a decade of these “National Employment Standards” being in operation it would be fair to say that the “NES” concept is accepted as a permanent part of the industrial relations landscape. Indeed they are enshrined as a cross reference in most (if not all) Modern Awards. Moreover, there has been very little if any “political tinkering” with them – the only change being amendments in 2012 that related to parental leave and requests for flexible working arrangements (which were not politically controversial). However, the first mentioned anxiety, namely that some conditions might start to atrophy despite the need for incremental change, is still a worry.

Sick Leave in the USA… The Patient’s Condition is Improving

In California, USA, starting on 1 July 2015, all employees  will get, for the first time, a statutory minimum sick leave entitlement.

This will make California the second out of 50 States of the USA to provide this extraordinarily generous benefit.

But by long established Australian standards, the entitlement is pretty small – in effect 3 days a year with a capped maximum accumulation of 6 days.

This “breakthrough” is provided for in the Healthy Workplaces, Healthy Families Act 2014 (California).

The Act’s new entitlement is of course surrounded by conditions and exceptions (such a milestone would have to be smothered in them for employers to be able to cope) but the main elements are these: